The Trouble with Traffic

Traffic has seen a decrease since COVID-19, an environmentally friendly change that seems likely to stick around 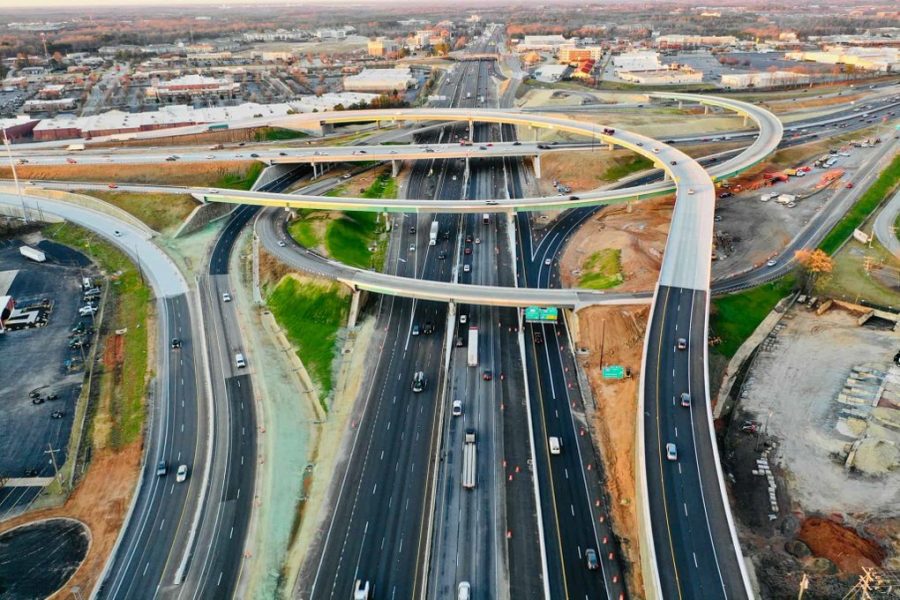 Providing an easier way to change interstates near Greenville, the new I-85 interchange has lessened the amount of traffic substantially.

After a long day of work, many Americans rush home but are halted by the immense traffic on busy interstates. This traffic conundrum has been a part of modern American society since the introduction of cars, but recently the accessibility of cars has increased, drastically increasing the amount of traffic on the roadways. This influx of traffic has created a movement to find ways to decrease the amount of traffic.

Recently, due to the ongoing COVID-19 pandemic, scientists have been able to see the effects that lessened traffic has on the environment, with preliminary reports showing positive results. According to brookings.edu, traffic in metropolitan areas, where most of the traffic in America resides, was down 75% during the height of the pandemic. According to this same article, traffic in the South, including the upstate region of South Carolina, had the least amount of change in traffic.

Social distancing due to COVID-19 implemented a new, and most likely permanent, way of working with virtual meetings. Working from home will limit the amount of people that are commuting to work, which will lessen the amount of traffic on the roadways.

Prior to COVID-19, South Carolina attempted to limit traffic within the state, especially around the fast-growing Greenville area. The South Carolina Department of Transportation undertook a $231 million-dollar deal with joint-venture company Flatiron-Zachary to ease the congestion that could be commonly found surrounding Greenville.

“The new interchange will relieve congestion and increase safety on the third busiest interchange in South Carolina,” the company said via their website.

This new interchange has been met with positive praise from many drivers, including Isabelle Edwards (11), who drives through this interchange on a consistent basis for activities based in Greenville.

“As someone who was used to driving to Greenville almost daily, the new efforts to limit traffic via the new interchange were a great help with my commute to Greenville,” Edwards said.

As the country moves forward after COVID-19, the rising traffic problem should start to dissipate naturally. The rise of virtual meetings as well as the new infrastructure will create roadways with less congestion, a sight that will many Americans will be glad to see.