The Dark Side of K-Pop 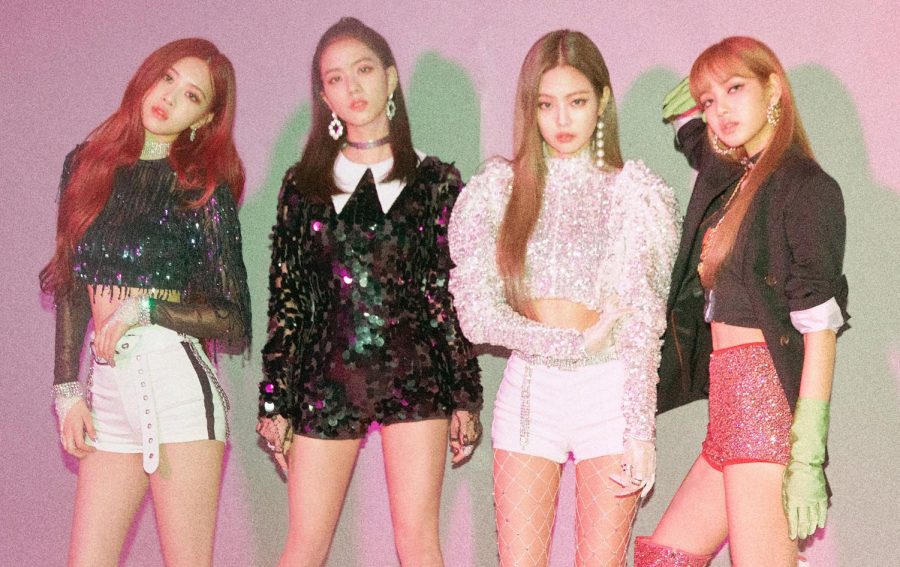 With their glittery costumes and pastel pink highlights, the K-Pop members of BLACKPINK pose for a picture. The group has a huge American following and performed at Coachella in 2019.

Korean pop music, or K-Pop, is a category of music originating in South Korea. The genre is set aside for its electronica sounds, hip-hop inspiration and idolization of stars. According to 90daykorean.com, K-Pop is influenced by Western music, especially American pop culture, and has even gained a huge following in the United States.

Tristan Willcox (12) is a musician with an appreciation for all types of music. Though he does not usually listen to K-Pop, he has a few select favorite artists and songs that stand out.

“I’m a fan of the songs Cherry Bomb by NCT 27 and Monster by EXO,” Willcox said. “Both share a sort of intense feel because of those massive synths and the rushed vocals, which is something I generally enjoy.”

However, new information reporting the hidden lives of K-Pop artists shows the industry is harmful and degrading to its performers. In their teens, young Koreans who seek to be K-Pop stars begin training as rappers, dancers and singers. According to grunge.com, the few “lucky” teens who sign contracts with producers do not know what they are giving up. For instance, signing a contract, which are termed “slave contracts,” might include staying with a group for 15 years with extremely low pay. Furthermore, these teens are exploited for advertising and become idolized for their sexuality. With their low pay as K-Pop stars, the Korea Joongang Daily reported in 2011 that 60% of former K-Pop idols who had given up on the profession to become actors were dependent on pay from prostitution.

In addition to the long-term contracts K-pop stars sign to, they are expected to adhere to strict beauty standards. For instance, young women seeking to become K-Pop stars are told by their management companies that their faces are too wide and consequently undergo surgery involving breaking the jaw and shaping it into a V–formation. It is also common for young K-Pop entertainers to alter their slender eyes for a more Caucasian look, reflecting America’s influence on the industry. Weight is another important aspect to K-pop stars, as ideal women are slim, and girls consequently undergo extreme diet routines and cosmetic surgery to achieve a certain appearance. Their wide audience is directly influenced by these harsh beauty standards, making plastic surgery common among teens in South Korea.

Ho Ryeong, member of the boy band Great Guys, spoke to insider.com in an interview about his experience with food in the K-Pop industry.

“Honestly, we don’t have much time for eating,” Ryeong said. “Nor are we free to eat what we want.”

The darker aspects of K-Pop are not focused on in the media, and the genre has become popular based on its fashion and performances. The visuals of K-Pop music are integral to captivating audiences. Stars learn to dance in perfect, synchronous movements for performances and music videos. Their styles are unique and often include bright colors with a particular emphasis on pink. Other groups go for an edgier look, such as the all-female group BLACKPINK, who writes songs about independence and strength.

Jayla Shands-Hamilton (11) was raised with a South Korean influence from her family and is thrilled by the individuality of K-Pop music.

“My favorite group is EXO because they make music of all genres that anyone can enjoy. They’re just so unique,” Shands-Hamilton said.

The devoted K-Pop fans who support this type of music are not tuned into the low pay, sexualization and extreme dieting their idols are forced to undergo, as mainstream media publishes only the brightly colored, cheerful music videos and styles of the industry. As a result, the struggles faced by K-Pop stars not only go overlooked but are supported through its growing popularity.

“Avid K-Pop fans are constantly endorsing the system by listening to the music and buying merch. They end up actively supporting the industry they’re trying to reform, whether they mean to or not,” Willcox said.