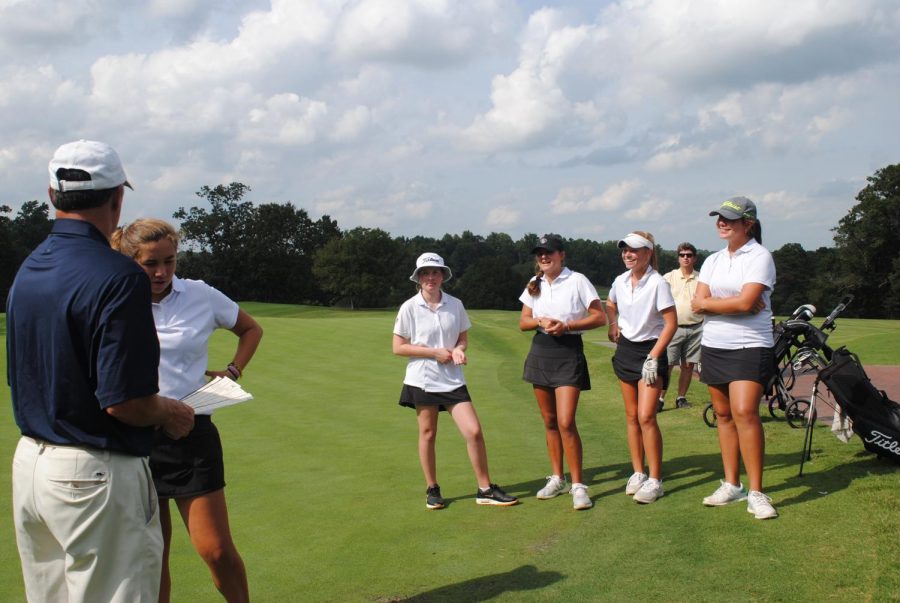 The girls' golf team prepares for their match against Riverside.

The Viking girls’ varsity golf team teed off their season on a high note with four consecutive wins in a row. Led by Coach Todd White, the 2020 season was a successful one for the team.

“The 2020 girls’ golf team, especially seniors Natalya Carroll and Loral Stinson, should be proud of their accomplishments,” White said.

The girls’ first match was against Wade Hampton where they won 173-227. With one win under their belt, the team went on to face Riverside where they walked away with another win, 173-234. The girls then faced Wade Hampton for a second time where they once again secured the win, 173-219. With a record of 4-0, the girls defeated Travelers Rest, 173-219. The Vikings faced their rival Dorman where they would face their first difficulty of the season with a close loss, 184-180.

The team went on to play Dorman again, where they lost (188-180) but were still determined. Despite the two losses, the girls moved on and beat Riverside, 188-234. The team then played Byrnes, where they lost 182-174. The girls played Dorman for a third time and fell short of a win, but this did not stop them. The team finished 3rd in the region with Loral Stinson, Laney Brothers and Natalya Carroll earning All-Region honors for their great performances.

Laney Brothers (9) says this high placement serves as a gauge of how far the team has come since last year.

“I think we did better than last season and improved a lot,” Brothers said.

As a senior leader, golfer Natalya Carroll (12) wants to leave knowing that the girls will still practice as much as possible and still have a great time at practice.

“I’d also like them to take up the responsibility of keeping everyone’s attitudes at the tournaments and matches,” Carroll said.