Following in the footsteps of former Viking Henry Bishop, kicker William Joyce has blossomed into a star, garnering interest from many college programs 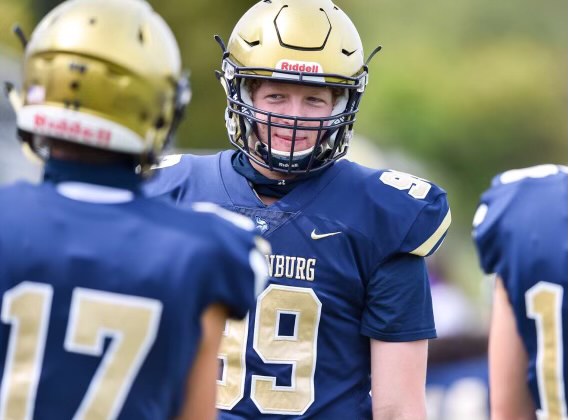 Enjoying his last season as a Viking, William Joyce took his game to another level during the 2020 football season.

William Joyce (12) has two of the most high-pressure jobs on the football team – he is the kicker and the punter.

“You go out onto the field and all eyes are on you. You have a job to do and if you miss…everyone is disappointed. The hardest part of being a kicker is how you react when you do miss. You have to be able to shake it off, move on, and make the next kick,” Joyce said.

Joyce has played football since the eighth grade at McCracken Middle School. In addition to football, he has played basketball, baseball and he continues to play soccer.

“All sports I have played have taught me to be competitive, [and] my competitiveness is what pushes me to get better every day,” Joyce said. “Soccer is the only other sport I still play and has helped me the most when it comes to kicking on the football team. The leg strength and technique I developed from playing soccer for so many years almost directly translated to kicking.”

Joyce has attended several training camps by Kohl’s Kicking Camps in Jacksonville, FL; two Southern Showcases in Atlanta; the Underclassmen Challenge in Orlando, FL; and the National Scholarship Camp in Gatlinburg, TN. Each of these experiences has helped attract the attention of recruiters.

Joyce was selected to be South Carolina’s kicker in the 2020 Shrine Bowl of the Carolinas, the oldest high school football all-star game in the United States. He is the second kicker from SHS in two consecutive years to be invited to the Shrine Bowl.

“This year…selections were based off of performances during the season,” Joyce said. “When they announced the Shrine Bowl team, I was completely surprised.”

The game was scheduled to occur on Dec. 19 in Wofford College’s Gibbs stadium, but the Shrine Bowl Board of Governors unanimously voted to suspend the game because of challenges and safety concerns presented by COVID-19. Although the event was canceled, the Shrine Bowl’s organizers and coaches still decided to recognize the players who would have participated.

Joyce was also invited to play in the Blue-Grey All American Bowl, which, according to their website, was founded and established in 1989 in order to help young players “receive national exposure” and “secure scholarships to a college.”

Coach Mark Hodge believes the Viking kickers, Joyce, Will Fowler (12), and John Love (11), are successful because of their strong relationship and ability to work together.

“I was blessed to inherit 3 awesome kickers in William Joyce, Will Fowler and John Love. All three of these young men are phenomenal kickers and young men. Their successes are largely due to their accountability of each other,” Hodge said. “William does everything in an excellent fashion and does so respectfully.”

“…I’ve played since 9th grade. I’ve played with William since then. He’s a good teammate because of his work ethic and how he encourages others to succeed alongside him,” Love said.

Despite playing a shorter season due to COVID-19, Joyce was still able to enjoy the relationships he has built with his teammates and says that the coaches helped the players grow.

“I have made a lot of friends and built a lot of relationships since I started playing football,” Joyce said. “We all push each other to be better and we all have a lot of fun doing it.”