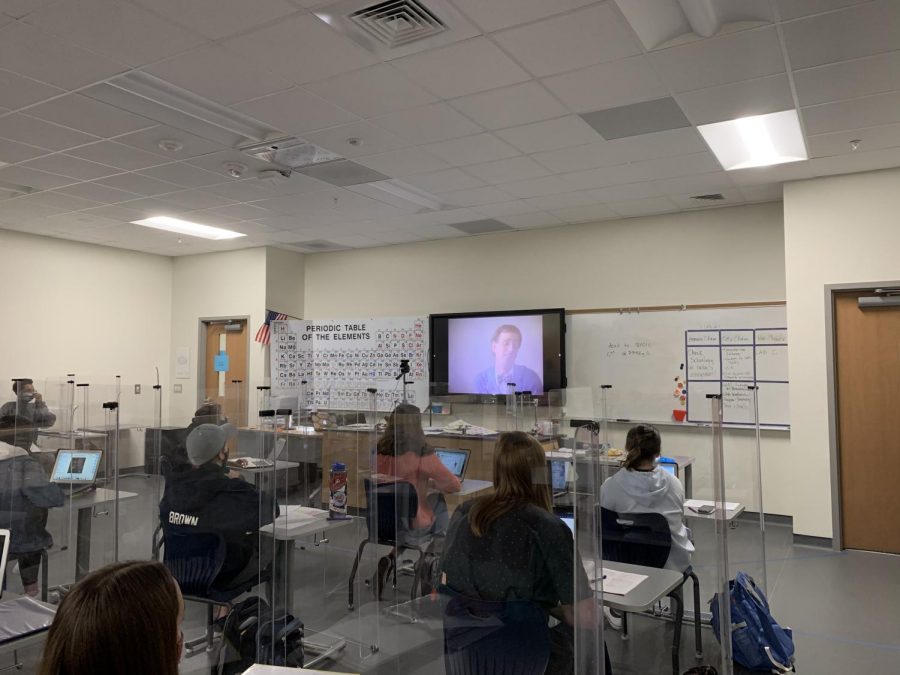 Kim McAbee's chemistry class learns about acids from one of Bill Nye's entertaining and informative videos.

William Nye, more commonly known as “Bill Nye the Science Guy,” became popular in 1993 when his hit TV show aired on Disney Channel for the first time. According to planetary.org, before the show, Nye was a scientist and engineer who graduated from Cornell University in 1977. He worked for Boeing Corporation and Sundstrand Data Control near Seattle where he is credited with the invention of a hydraulic resonance suppressor tube that is used in Boeing 747 airplanes.

After unsuccessfully applying for NASA’s astronaut training program, he decided to try a new hobby. He became a standup comedian as a side job and discovered his love of making people laugh. Nye quit his day job at Boeing and became a comedy writer and performer on the show “Almost Live.” Eventually, he earned his own show which came to be known and viewed by millions of people.

Today, Bill Nye continues to advocate for science. He became the CEO of the Planetary Society and teamed up with the National 4-H Council to promote space exploration with his latest project, the STEM Challenge: Mission to Mars. In 2017, he debuted his own Netflix series titled “Bill Nye Saves the World.” In the show, Nye, the Emmy award winning host, brings famous guests and science experts to his lab and talk show to explore the scientific issues that touch our lives today. Nye relates the issues discussed to politics, pop culture and society.

Skylar McClintock (12) remembers Bill Nye to be a fun and engaging character from her childhood.

“I like how interesting Bill Nye made science for little kids and how the show made us actually look forward to learning new things in school. I think it’s really cool that he is using his platform to continue to bring awareness to a real issue on our planet,” McClintock said.

During the pandemic and over the course of quarantine, Nye has used his social media platforms to continue his mission of science education and reach out to younger generations.  Videos posted on Nye’s Instagram account went viral after the normally clean-spoken children’s television host used substantial amounts of profanity in an effort to bring attention to the video and the issues he was talking about. He has spoken about issues such as global warming, racism and the importance of following safety guidelines during the pandemic. Some of Nye’s language and messages have sparked controversy, not only with the parents who let their children watch Bill Nye, but with scientists who have called out his credibility.

“Climate change is happening, humans are causing it, and I think this is perhaps the most serious environmental issue facing us,” Nye said in an Instagram video message.

Despite some of the hate he received over his posts, he continues to share his messages and is supported by groups of highly-achieving scientists and science education organizations. While fans expressed shock with his choice of language and tone in his educational Instagram videos, he claims it is only to press the urgency of the topics he discusses and catch the attention of viewers of all ages.