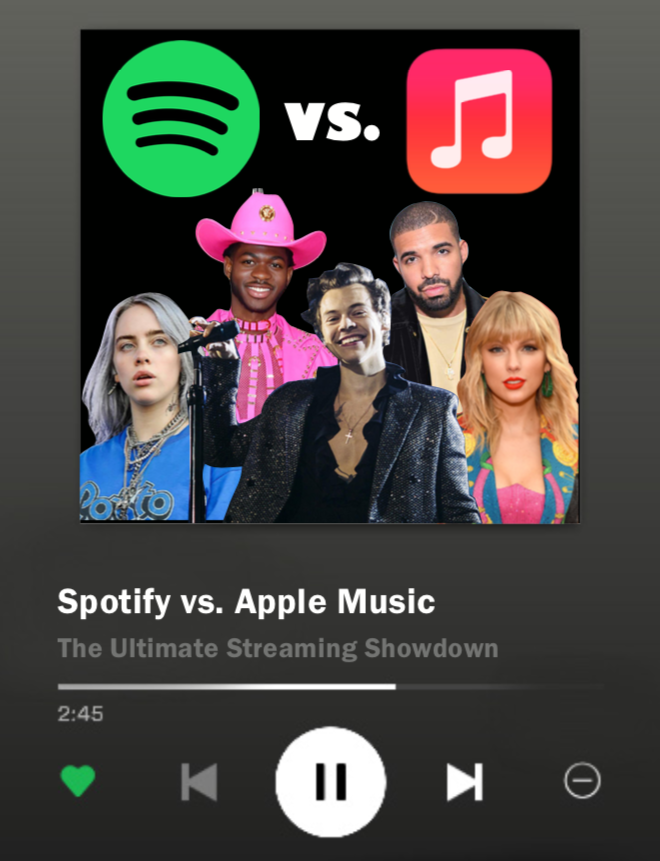 Photo illustration by G. Till

Today's music listeners most commonly use Spotify or Apple Music. But which service provides the best content?

Music has always been a means of expression and creativity. The modern music streaming services Apple Music and Spotify create a musical outlet that fulfil those needs. Recently, consumers have been debating the superior option for their listening purposes. With a move away from purchasing individual songs and albums that was so popular in the 2000s and the increased demand for streaming services, the two companies now dominate the music streaming industry.

The most comparable aspect between the two services is price. Spotify offers a free version of its platform at the expense of listening to ads every few songs. Also part of the no-fee version is the inability to skip songs and download music. The premium option abolishes these limits and costs $4.99/month for college students and $9.99/month for individuals. Duo and family packages are also offered at discounted rates.

Apple Music offers the same rates, with both college and individual prices. Though costs are equal for both platforms, the fact that Spotify offers a free version has put it ahead of Apple Music in numbers of users. According to statista.com, with 320 million users and 144 million subscribers, Spotify tops Apple Music’s 72 million subscribers, allowing it to generate more revenue in the past few years.

Maree Hernandez (10) finds Spotify to be her favorite service for its sharing features.

“I like that you can make your own playlist and share them with friends. It’s nice to be able to share music with people,” Hernandez said.

Each platform offers and emphasizes its own specific listening features. For instance, Spotify is known for its “Spotify Wrapped” playlist, which appears at the end of each calendar year. The collection includes a person’s most played songs, artists, and genres for that year. Also unique to the service is its “Discover Weekly” playlist, which is an assortment of songs generated based on one’s most recent song preferences. Thus, Spotify has become appealing to customers for its focus on individuality and ability to introduce similar music based on a person’s existing taste.

Spotify’s website advertises its individual-inspired playlists. On Dec. 1, 2020, the website and app released all information regarding these playlists for every user.

“Eligible users can access their personalized Wrapped experience exclusively in the Spotify mobile app,” Spotify.com said. “As usual, this year’s Wrapped is full of insights on the artists, songs, genres and podcasts that defined your listening in 2020—and it’s created from data unique to each and every listener.”

Apple Music has a heavier focus on visuals than individual preferences. For example, Apple Music features a lyric search engine in which a person types song lyrics in to find a song. This “lyric look-up” is helpful when one remembers a song fragment but not its actual title. According to apple.com, the app also provides access to music videos and highlights those going viral to keep every user in the know.  Additionally, because it is an Apple creation, the service easily connects to other Apple products. Apple TV and Siri readily connect to Apple Music, for instance, allowing for easy access to music in different areas and at voice command.

Will Delaney (12) opts to use Apple Music for its compatibility with other Apple products.

“I like that it integrates directly with my phone’s operating system,” Delaney said. “I also have a home pod and I like that it syncs my music across devices.”

Though both services offer unique features, the choice between the two comes down to a single person’s preference. Spotify includes podcasts and heavily emphasizes the individual, while Apple Music includes lyric lookups and music videos. Either way, both trending streaming services offer modern attributes to draw in consumers.