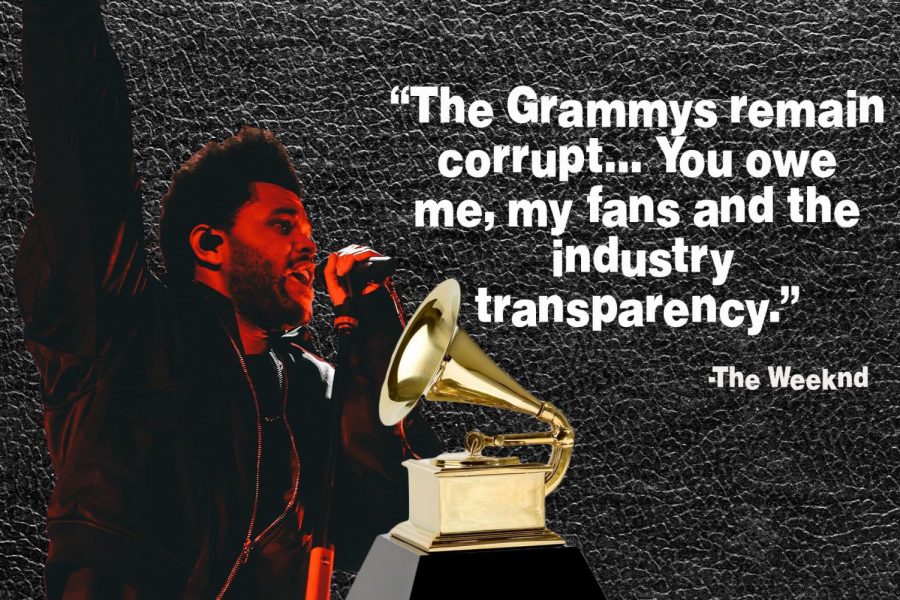 The Weeknd shocked the music industry by speaking up on the Grammys being unjust. He captured the attention of many fans and fellow celebrities that have shown support.

Watched by millions each year, award shows have proven to be extremely influential in the entertainment industry. While it may seem as though they serve to recognize exceptional music and films and review the year in entertainment, award shows firstly serve as advertisement for production companies. Music and film producers depend  on award shows as a vital promotional tool. This promotion is known as the award show “bump.” According to learn.stash.com, between 1990 and 2009, films that were nominated for Best Picture Oscar Award generated an additional $14 million at the box office. Similarly, streaming services such as Netflix tend to see significant stock price increases after having award show nominations.

In an interview with marketplace.org, Evan Hoffman, the Senior Industry Analyst at IBISWorld (a company that provides analyzed research on thousands of industries across the world) explained how an Oscar is not only career-changing for the actors and actresses, but for everyone involved in producing the film.

“I’d compare winning an Oscar to a team winning the World Series or the Super Bowl,” Hoffman said. “Key players (lead actors/actresses/directors/producers) would likely become more sought after which increases their bargaining power to demand higher wages in future projects. But even non-key players would be able to tout their contribution to the success.”

Controversy about how awards should be nominated and who judges the quality of subjective works like music and film was sparked this November when the 2021 Grammy nominations were announced. Fans and artists were disappointed in the Grammys for not nominating “deserving” artists. The Weeknd is a Canadian musician who emerged in 2016 and has become one of the 21st century’s biggest successes. He was expected to receive a number of Grammy nominations after an extremely successful year in which he released his record After Hours, the biggest selling album of 2020. His recent song, “Blinding Lights,” is officially the longest-running top 10 hit in US chart history according to cnn.com.

The Weeknd’s lack of Grammy nominations has caused viewers to no longer respect the judgement of large award shows and has caused increased speculation regarding the integrity of awards. The artist tweeted about his disappointment following the announcement and was met with the support of fans and other celebrities.

“The Grammys remain corrupt,” The Weeknd said. “You owe me, my fans and the industry transparency.”

Prestigious awards like the Grammys, Oscars and Emmys have long been rumored to be corrupt due to behind-the-scenes deals between producers and board members. Production companies pay large sums of money to nominate and sometimes win an award for a piece that they produced in hopes of profiting off of an award show “bump.” While this notion hasn’t been proven, there is enough evidence to raise an important question: Why should society evaluate the quality of entertainment based off of the opinion of a small, corrupt group of judges?

Despite growing disappointment, these award shows remain successful as most of their audience watch for entertainment purposes rather than for artistic evaluation. The star-studded scene and one-of-a-kind garments draw viewers in.

Mason Seegars (11) enjoys watching the Grammys each year to see her favorite musicians, the fashion and the performances. This March she will be tuning in to the virtual 2021 Grammys.

“I think award shows do not award the best music; however, they do a good job of nominating the most popular artist of each topic,” Seegars said. “I believe that everyone has their own opinion on the “best” music and there are definitely more popular genres but there is no definite ‘best’ music.”