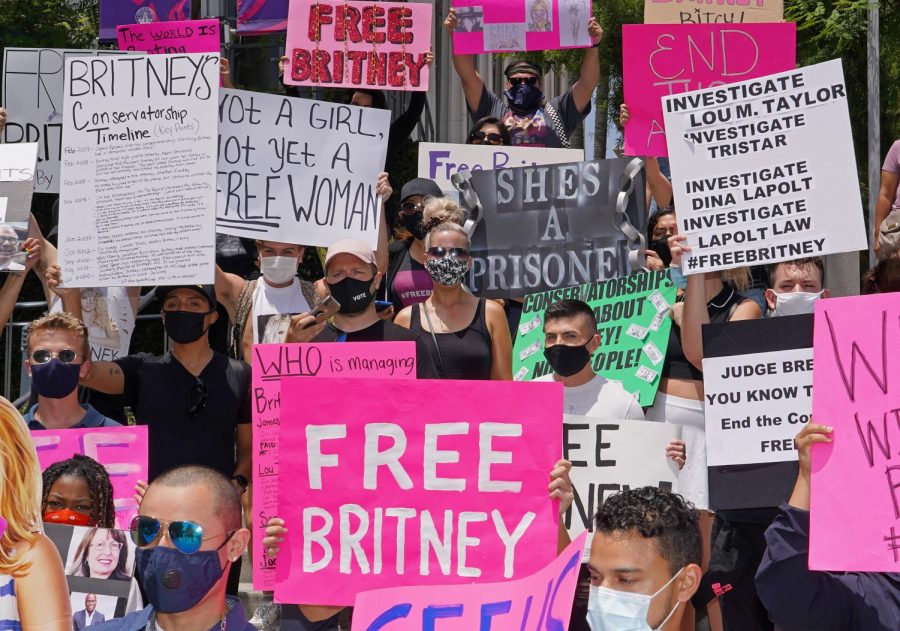 Supporters of Britney protest in Los Angeles in support of her release from oppressive conservatorship.

Anyone who keeps up with popular culture most likely remembers Britney Spears’ infamous mental breakdown in the late 2000s – the shaving of her head, her divorce, her legal battle for sole custody of her children, physical altercations with the paparazzi, and trips to rehab and psychiatric hospitals. Her life was the subject of tabloid covers and her privacy was nearly nonexistent.

As a result, the Los Angeles Superior Court approved her father and a lawyer to be Spears’ conservators in 2008. According to insider.com, the arrangement was extended four times in 2020, despite Spears’ efforts to have her father removed from the conservator.

Fans, who believe she is being manipulated and abused, have grown concerned about the legality of her conservatorship. The #FreeBritney Movement was started by Tess Barker and Barbara Gray, creators of the podcast “Britney’s Gram.” Their podcast provides updates on Spears’ life and it analyzes her social media posts, which some fans think are attempts to signal her desire for a release from her conservatorship. On Feb. 5 of this year, the New York Times produced a documentary titled “Framing Britney,” which has brought attention to controversial aspects of Spears’ conservatorship.

New York Times Senior Editor Liz Day was interviewed in the documentary and provides a detailed account of the conservatorship and events surrounding its establishment.

“According to court records, Britney’s conservators are able to control who can and cannot visit her and retain security guards for her 24 hours a day. They have the power to access her medical records and communicate with her doctors. They can take control of her house, and even cancel her credit cards. They can make recording, touring, and TV deals for her, and are deeply involved in her finances,” Day said.

Day also recounts MTV’s documentary, “Britney: For the Record,” which was filmed during the first year of the conservatorship. Spears comments on the conservatorship during a filmed interview, and according to Day, it is one of the only documentations of Spears’ true feelings about the arrangement.

“If I wasn’t under the restraints that I’m under right now…with all the lawyers and doctors and people analyzing me every day…I would feel so liberated and feel like myself,” Spears said. “When I tell them the way I feel, it’s like they hear me, but they’re not really listening. They’re hearing what they want to hear; they’re not really listening to what I’m telling them…It’s bad.”

After 13 years, Spears is still not allowed to make decisions about her own life – even after court hearings, petitions, and the overwhelming support from fans. According to cbsnews.com and 34st.com, she has also received support from other celebrities, including Paris Hilton, Vera Wang, Jameela Jamil, Andy Cohen, Sarah Jessica Parker, Bette Midler, Meghan McCain, and Miley Cyrus.

“Conservatorships limit a person’s civil liberties, which we at the ACLU of course view as a core concern. But beyond that, conservatorships don’t necessarily actually make people safer: They can result in financial, physical, or emotional abuse,” the ACLU said.

“Britney’s conservatorship is completely unnecessary,” Lovelace said. “In the documentary, plenty of people who know Britney well said how she was responsible, managed herself and her career well. Although the court disagreed, they should have at least respected Britney’s one and only request to make the conservator someone other than her father. [Britney’s father] has always made it apparent that he is invested in Britney’s life [and] career solely for the money, and he shouldn’t be the one overseeing her finances and estate.”

Britney Spears is not the only female celebrity to endure legal struggles and a lack of autonomy.

According to Rolling Stone, in 2014, pop singer Ke$ha sued her producer, Dr. Luke, for release from her contracts with him because he sexually, physically, verbally, and emotionally abused her. She asked the court for an injunction, which would have allowed her to record music with another record label while the legal dispute was being settled. Her request was denied.

Taylor Swift tried to buy the master recordings of her studio albums for years, and in 2019, she was at the center of a controversy over artists’ rights. Music label owner Scooter Braun paid Swifts’ former label, Big Machine, $300 million for her first six studio albums. Swift was not informed about the sale, claiming that she found out about it when the public did. Braun now owns the right to make, sell, and distribute copies of the master recordings. Swift has protested the norm of record companies owning artists’ master recordings and signed with a new record company, which agreed to let her own the rights to her music.

With the reignition of Britney Spears’ ongoing conservatorship battle, it is becoming increasingly evident that female artists do not have the same access to autonomy as male artists do.

“I firmly believe that a situation like Britney’s wouldn’t happen to a male celebrity. #freebritney,” Lovelace said.