The club designed to teach a waning aspect of modern society: ethics 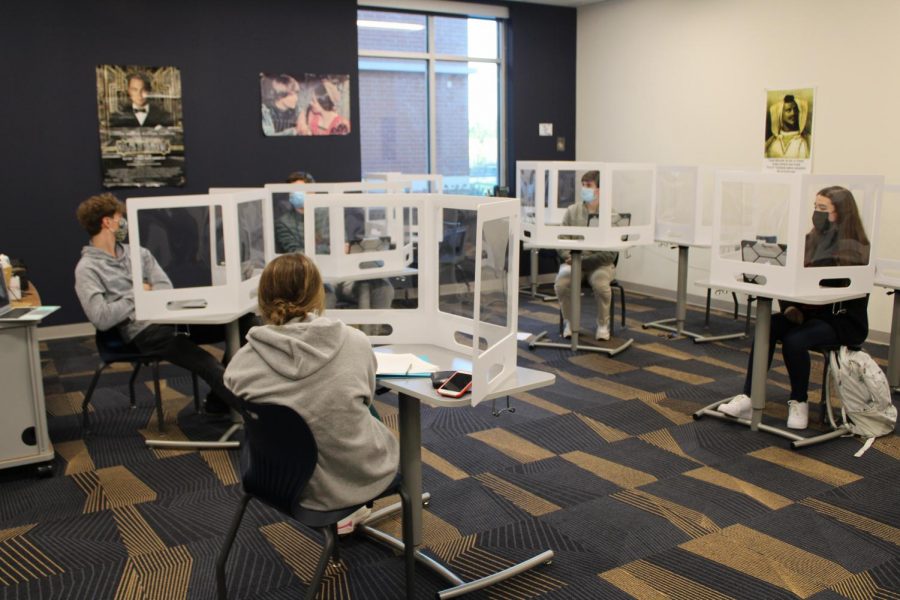 Working together while socially distanced, the Ethics Bowl team studies and prepares for their upcoming competitions.

In this new polarized, mass-media world, ethics have been brushed aside in conversation in exchange for fiery arguments. These arguments, which are heard everywhere from the school lunch table to the halls of the Capitol building, have made civil, calm conversations almost obsolete.

In 2012, the Parr Center for Ethics, which is located at the University of North Carolina-Chapel Hill, decided to combat this new aspect of modern society by creating the National High School Ethics Bowl (NHSEB). At its creation, the NHSEB sought to prepare students to navigate challenging moral issues in a thoughtful and open-minded way. Since 2012, the NHSEB has flourished across the country and is now found in 28 states nationwide, creating an environment for students to learn ethics and civility in dialogue.

This aspect of NHSEB is one that Erin Hubbell, an English teacher and the head of NHSEB at Spartanburg High School, sees as an invaluable trait for young students to gain at this point in their lives.
“It’s important for students to consider the ethical implications of social issues and to be able to discuss different perspectives in a civil and mature manner,” Hubbell said.
Under the guidance of Hubbell and English teacher Susan Plonski, the Spartanburg High School Ethics Bowl team has generated a great amount of success. At their recent regional competition, the SHS team, led by seniors Theo Goodchild-Michelman (12), Rebekah Maguire (12) and Jamey Whisnant (12), took home first place.

After the initial rush of winning had worn off, Goodchild-Michelman looked back at his team’s win and noticed the hard work that he and his teammates put into preparing for the competition.

“Looking back on our performance, it’s really fulfilling because I know how hard we worked and prepared, and it really showed in our performance and ultimate first place finish,” Goodchild-Michelman said.

As the head of the Spartanburg High School Ethics Bowl team, Hubbell has noticed the growth of the program in the years since its founding.

“This is our third year, and I have seen our students become more confident and able to make subtle distinctions while maintaining an argumentative thread as a group,” Hubbell said.