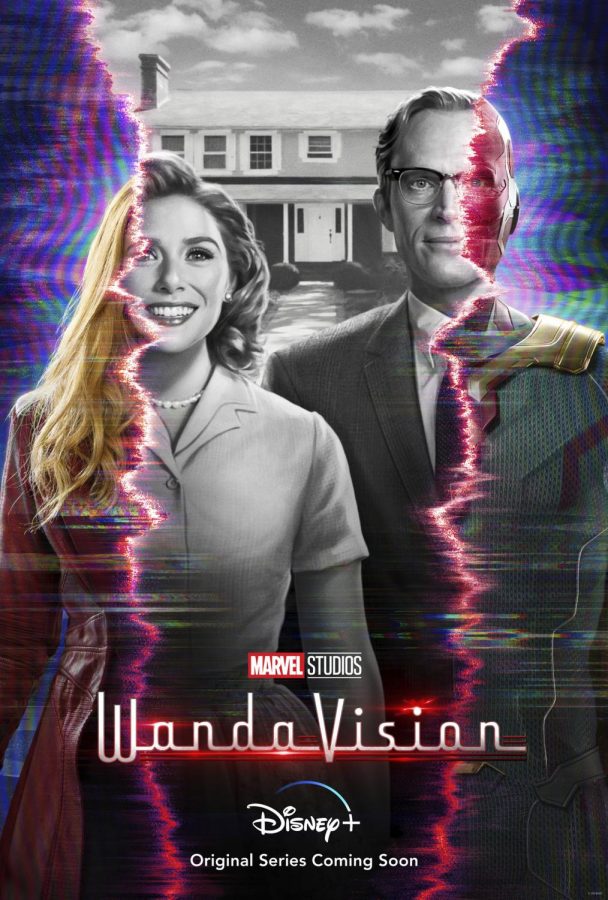 Wanda and Vision may seem to have ordinary lives, but a secret lurks in the darkness.

As Disney+ grows, the need to meet viewer expectations of shows and movies also rises. Wandavision, a sitcom-drama with the beloved Marvel characters Wanda Maximoff and Vision, has proven to go above and beyond these expectations.

Wandavision is part of the Marvel Cinematic Universe phase IV (MCU), which is a media franchise and universe of marvel superheroes, villains and other characters. It is one of the first TV series to be a part of the MCU. Though the show is similar to other movies in being part of the MCU, Wandavision goes for a whole new take on Marvel. The plot of the show (without spoiling it) outlines Wanda Maximoff and Vision’s life in a suburban neighborhood.

Because Wandavision is presented in a sitcom style and highlights the mystery of the villain, it is set aside from other MCU productions. Foster Neely (9) likes the mystery aspect of the show because it creates suspense.

Michael Henson (12) likes the fact that each episode is different from the last. Henson also likes the suspense built with every episode.

“I didn’t really have a favorite part because each episode was so different,” Henson said. “It kept me on my toes and interested for the next episode.”

Mike Hale of the New York Times highlights the uniqueness of Wandavision by describing the first couple episodes as odd.

“Wanda and Vision, when they think about it, have no more idea than we do about what’s going on or how they got there,” Hale said. “They struggle, in broad comic fashion, to hide their powers while going through sitcom rites like hosting a dinner party for the boss or putting on a magic act for a town fundraiser.”

While this new MCU show brings in lots of praise, it also brings up questions about other productions. Will there be more TV shows that fall in the MCU timeline? Disney has announced new TV shows being released within the next couple of years on Disney+, including Loki, Hawkeye, and even an untitled Wakanda series.

With Wandavision wrapping up its first season, a door for a whole new side of marvel, from TV shows to Disney+ exclusives, has been opened. Fans of Wandavision anxiously anticipate the addition of more exciting and thrilling films to the Marvel franchise.