Rise of the Veggies

As more plant-based food alternatives become available, the environment benefits, but does the consumer? 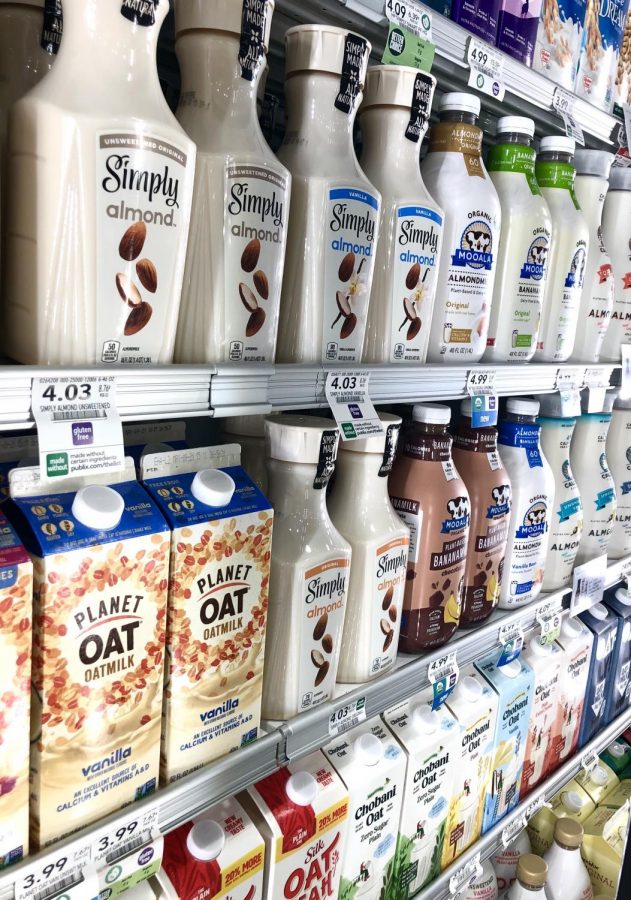 One common switch to the plant-based lifestyle is from dairy to alternative products such as almond milk, soy milk and oat milk. The dairy industry is known for consuming large amounts of water and producing copious amounts of greenhouse gasses. Plant-based milk and dairy products, however, require less water to maintain, take up less space and produce fewer greenhouse gasses. According to foodnavigator-usa.com, since its rise in popularity in the early 2000s, especially in 2011 when sales increased by 79%, almond milk has been paving the way towards less dairy consumption and aiding in the popularity of a more plant-based diet. More recently, alternatives to almond milk, such as oat and rice milk, have been popping up on grocery store shelves.

Marlee Allen (9) prefers almond milk over dairy and switched for a healthier lifestyle.

“I switched to plant alternatives because I realized it is probably a lot healthier than what I’ve been eating and drinking,” Allen said.

Aside from the dairy industry, access to more plant-based meats is increasing. Popular fast-food chains such as Burger King have  gone so far as adding a plant-based burger to their menu. At supermarkets across the nation, there are plenty of plant-based meats to choose from. These “meat” options, while far better for the planet, have some questionable downsides for the consumer.  To mimic the classic burger taste, veggie burgers have significantly higher sodium, which can be detrimental to heart health. Despite high sodium, these plant-based alternatives avoid some cancer risks associated with meat-eating, including colon cancer, prostate cancer, breast cancer, lymphoma and stomach cancer, according to peta.org.

According to an article by Harvard Health specialist Emily Gelsomin, healthier versions of plant-burgers can be identified if one pays attention to the ingredients.

“If a lower risk of diseases like cancer and heart disease is your ultimate goal, aim for the kind of veggie burgers that showcase their beans, grains and seeds front and center,” Gelsomin said.

Changing diets can be spurred by a multitude of causes, whether it’s an attempt to eat healthier or to show care for animals. Meat production is often an unflattering topic, especially in relation to the famous book, The Jungle, which is taught annually in a variety of ELA courses and often leave animal lovers upset with what they consume.

Sarah Kneisley (10) has been vegetarian for over five years now and has had a positive experience with plant-based diets.

“In fifth grade I watched a Cowspiracy video on YouTube and I’ve never eaten meat since. Not eating meat is not as hard as you would think, and it’s super sustainable. I love this lifestyle, and I honestly don’t see myself in the future without a plant-based diet,” Kneisley said.