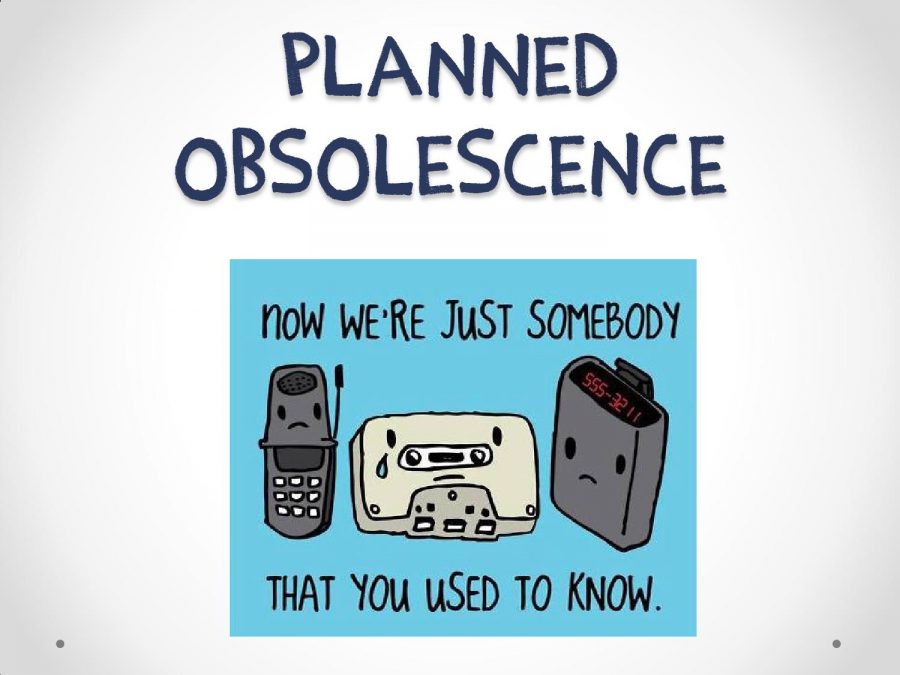 As companies look for ways to increase revenue, they have resorted to shortening life spans of products.

As the world becomes engulfed in the age of consumerism, global companies have looked to exploit customers through an immoral practice: planned obsolescence. Planned obsolescence, which is the deliberate shortening of a product’s lifespan, began as a way to energize the economy and raise gross domestic product (GDP), yet it has turned into a system that deeply harms the consumer as well as the environment.

Prior to the implementation of planned obsolescence, products were made to last, with some products such as cars and refrigerators designed to last almost a lifetime. Now, these products are created more affordably but are easy to break, often having to be replaced within a decade.

This new strategy began with the mobile smartphone. The smartphone was designed to be replaced after two to four years, and companies designed the battery to slowly deteriorate until the battery life became unusable. Recently, this strategy has endured public backlash and legal assault, which marks one of the first attempts to combat the economic and moral shortcomings of planned obsolescence.

As many consumers encountered faulty Apple batteries, they resorted to legal measures in order to fight the large company. Arizona Attorney General Mark Brnovich has led the charge in the judicial system against the major smartphone companies including Apple.

“Many consumers decided that the only way to get improved performance was to purchase a newer-model iPhone from Apple,”  Brnovich said in an interview with azag.gov.  “Apple, of course, fully understood such effects on sales.”

Robert Liollio (12) is an Apple user who has seen his battery life greatly diminish as a result of planned obsolescence. Consequently, he had to purchase a new phone in order to have one that kept a charge.

“I had an iPhone for about two years but its battery died quickly,” Liollio said. “I had to get a new phone, but I just found out about planned obsolescence. I think it’s pretty bad that companies do this.”

After Apple implemented planned obsolescence, other sectors within the world economy began to adopt the same strategies. In particular, the home appliance industry has begun to shorten the lifespan of their products to lower prices and increase the turnover of the products. The Whitegoods Trade Association, which is the largest association that deals with home appliances, acknowledged the drop in lifespan and quality of home appliances in the recent years.

“Obviously these cheaper products do not have the same build quality, performance or longevity and therefore the average lifespan has dropped from over 10 years to under seven years,” whitegoodstradeassociation.org said.

As more and more products are being made to break, the waste of these “old” products have accumulated to massive quantities. The rise of waste has created environmental challenges that outweigh the short-term economic gains created by planned obsolescence. Printer cartridges, which have been hit hard by planned obsolescence, are beginning to build up within the landfills of the United States according to bbc.com’s Adam Hadhazy.

“In North America alone, 350 million (not even empty) cartridges end up in landfills annually,” Hadhazy said. “Beyond waste, all the extra manufactured goods can degrade the environment too.”