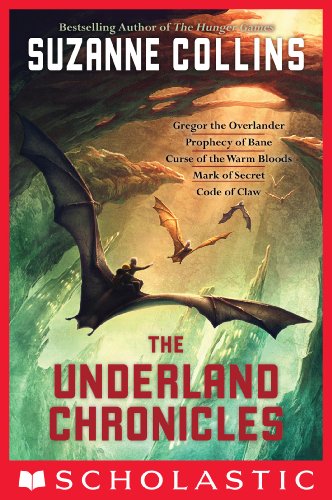 The Underland Chronicles is a five book series by best-selling author Suzanne Collins depicting the adventures of a boy who falls to another society beneath New York City.

Grace Till, News Editor/Co-Editor in Chief

In my last ever edition of The Page Turner, I want to share with you my ultimate favorite read of all-time: The Underland Chronicles. The series is a lesser–known hit by Suzanne Collins, author of the best-selling Hunger Games series.

The basic storyline follows young Gregor as he falls beneath the surface of New York City and becomes entangled with the affairs of a war-torn world known as the Underland. As he meets talking bats, rats, spiders, and roaches, Gregor explores complex issues in society from genocide to biological warfare.

Collins’ character development is what really roped me into this series. Each creature has its own story and changes as horrors unfold in the Underland. Most notably is Ripred, the world-weary rat who fights on two opposing sides of war. His deadly intelligence is both admirable and off-putting, but he softens in important moments and mentors Gregor. Not to mention, Collins’s gives her characters big attitudes and sarcastic lines that left me laughing out loud.

I do not recommend this book to anyone except young middle schoolers and those who love the sci-fi fantasy genre. What I do recommend, however, is that you find that book or series that always brings you home. Whether it’s historical fiction, fantasy, or mystery, I hope you find a book that you can reread countless times and unfailingly brings you peace, just as the Underland Chronicles does for me.