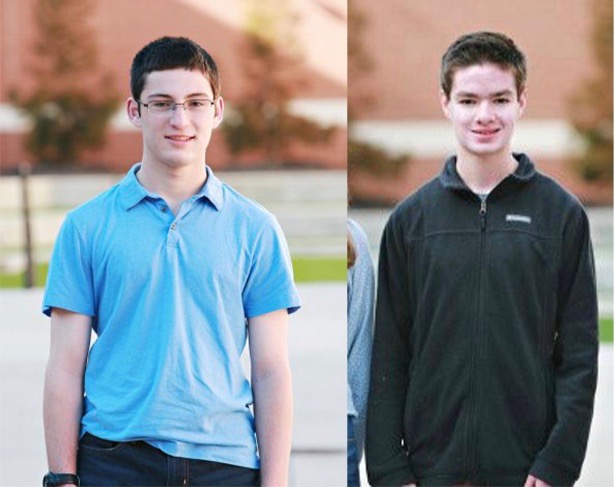 Proudly smiling, Falcon (on left) poses for his Outstanding Senior photo. English teacher Erin Hubbell wrote a statement about his academic success.  Lawton (on right) was voted “Most Intellectual” out of the entire senior class. His picture appeared in the 2021 SAGA yearbook for this superlative.

As senior year wraps up, soon-to-be graduates celebrate their achievements in extracurriculars, academics and sports. Well- rounded scholars must spread their time and energy across a multitude of activities but are ultimately rewarded with accolades and awards. Drew Lawton (12) and Ilan Falcon (12) are two students who have worked hard throughout high school to be where they are today.

Lawton was named a National Merit Semifinalist, meaning he was in the top 1% of the nation’s scores for the PSAT. He has been involved in multiple AP classes since freshman year and was voted “Most Intellectual” by his classmates.

Lawton’s impressive academic record is only a part of what makes him a strong student. Lawton has excelled musically and has been involved in the band throughout high school, playing the alto saxophone and receiving many achievements for his talent. Lawton served as first chair in the region band in 9th grade and was on the All State Band from freshman to senior year. He was Woodwind Captain in 11th grade and has been the Band Captain for his 12th grade year.

Band teacher John McCallister thinks of Lawton as a focused and diligent musician who has excelled in all aspects of band.

“Drew has had a profound impact on the other students around him,” McCallister said. “He is a strong leader and an inspiration to his peers.”

As well as being involved in music throughout high school, Lawton has been heavily involved in Boy Scouts, where he reached the Eagle Scout ranking. He also participated in the honors Cybersecurity class and cross country and track teams.

Ilan Falcon is another example of a student who excelled tremendously in all types of extracurriculars and academics. Falcon also received the National Merit Semifinalist award and has taken on the academic load of a schedule of AP classes, running cross country and track and participating in extracurricular activities such as Orchestra and Spanish.

Spanish teacher Neyda Mora enjoyed having Ilan in her Honors Spanish IV class in 11th grade because of his helpfulness and natural fluency in the language.

“Ilan’s intelligence, discipline, commitment and focus exemplifies what it means to be a well-rounded student,” Mora said. “Learning has no limits for Ilan; he is always putting 100% in everything he does.”

Falcon received the award of Outstanding Senior, nominated by English teacher Erin Hubbell. She described him as “an outstanding student who brings …full engagement to every task in front of him.”

In the coming fall, Lawton and Falcon plan to attend Georgia Institute of Technology and Columbia University, respectively.