Broadening the Youth Vote in the Upcoming Election 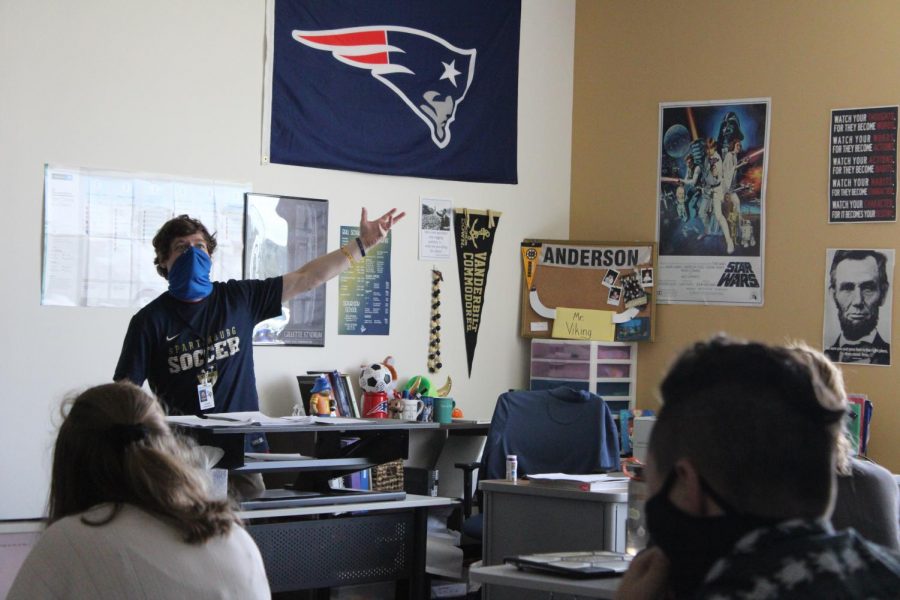 Lecturing his AP Government and Politics class on the importance of voting is one of Mr. Anderson's favorite activities.

As the 2020 election approaches, the responsibility of American citizens to vote becomes more imminent. One of the most influential voter groups is young voters. In a recent study conducted by NPR, millennials and some portion of Generation Z, ages 18-39, make up 37% of possible voters. However, young people are notoriously bad at voting, with only 51% of voters under 40 turning out compared with 70% of voters older than 55. This low rate is not because young people aren’t interested in politics, but because the voting process is difficult to understand.

One important way to increase voter turnout amongst young people is to facilitate the registration process and educate them on what they will need to have prepared when it comes time to cast a ballot. Many nonpartisan organizations such as When We All Vote work to register students and encourage young people to vote.

Millennials and Generation Z should have equal participation in the voting process because the policymakers that are being put in office will be making decisions that directly influence them. Issues such as climate change, health care access and student loan interest rates will soon or already do affect these younger generations.

Along with the presidential election, local elections are important for young people to participate in, even as first-time voters. Local government concerns important functions such as education systems, roads and police and fire departments that influences all age groups.

Many seniors will turn or already have turned 18 before November 3 and are therefore eligible to vote in the presidential and local elections. John Roueche (12) plans to vote in the upcoming election on November 3.

“I am excited to be able to vote for the first time because I finally have a right to participate in our government,” Roueche said.

Other students who are not of age to vote can still participate in the voting process. Poll workers are people who make sure the voting polls run smoothly and orderly. This election, the opportunity to be a poll worker is open to younger people to minimize the number of at-risk citizens that would have normally had to attend the polls.

Theo Goodchild-Michelman (12) is looking forward to working as a poll worker this year even though he is unable to vote.

“Poll working is a good way to be involved in local government, and I feel like I am participating in democracy even though I can’t vote,” Goodchild-Michelman said.

Educators can encourage their students to vote or at least learn about politics since they affect everyone at some point.
AP Government and Politics teacher Joseph Anderson advises his students to pay attention to nonpartisan news sources and learn about issues that will affect them.

“The world is constantly changing, as are the issues facing young voters. Civil injustice, economic inequality and climate change are just some of the major issues facing a new generation of voters,” Anderson said. “While there are many avenues that young people can take to help influence issues such as these, the most effective and influential avenue any American can take is through exercising one of their most important civil freedoms – the freedom to vote.”