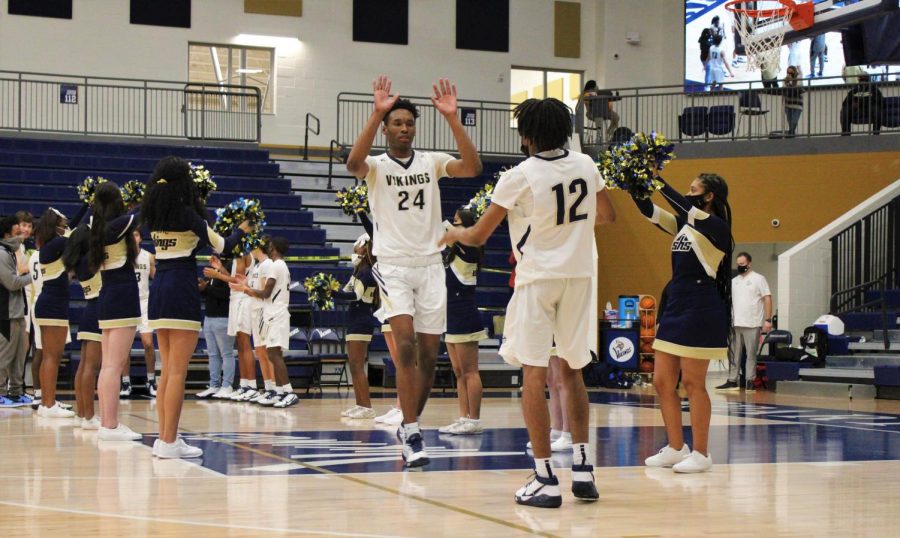 The Vikings take to the floor during a home game.

A Trying Season for Vikings Basketball

Determined Vikes fight to the end

Spartanburg High School’s varsity boys’ basketball team finished the season with an overall record of 8-10 and a league record of 2-10. The Vikings started the season out with a six-game winning streak, however they soon took their first loss to a strong Riverside team that eventually went on to win the 5A 2021 SCHSL Boys Basketball State Championships.

“Covid hit hard.  We had three players test positive and had to quarantine for 14 days. We were able to come back and practice right before Christmas for two days before Covid struck again. This time, we had to quarantine for ten days. We missed 24 days of practice and games in the month of December. We came back and practiced Jan. 6 and 7, and then had to play eight games in 14 days,” Coach Fred Ford said.

The Vikings nevertheless were able to come back and get their revenge against Riverside at the end of the season, beating them 45-44 in overtime. The team finished the season off with a win against Hillcrest 79-62 but still were unable to make the playoffs. The Vikings are destined to make a return in their winning ways as the team believes it has great potential.

On the ladies side, the Spartanburg High School’s varsity girls’ basketball team finished the season with an overall record of 4-13 and a league record of 2-7. The Lady Vikings were left without Lilly Phillips (12) for a span of five games, and they consequently lacked their key contributor to offense, as Phillips averages 10.4 points per game. Nonetheless, they kept fighting and finished the second half of the season 3-5. The team’s young roster and raw talent is certain to help them make a playoff run soon.

“Finishing with a 4-13 record does not reflect all the hard work and improvement this team made over the course of the season. This group overcame a lot of adversity, which included two separate team quarantines. We have eight players that will return next season, and I am excited to see what the future holds for this group!” Coach Sharon Dillon said.