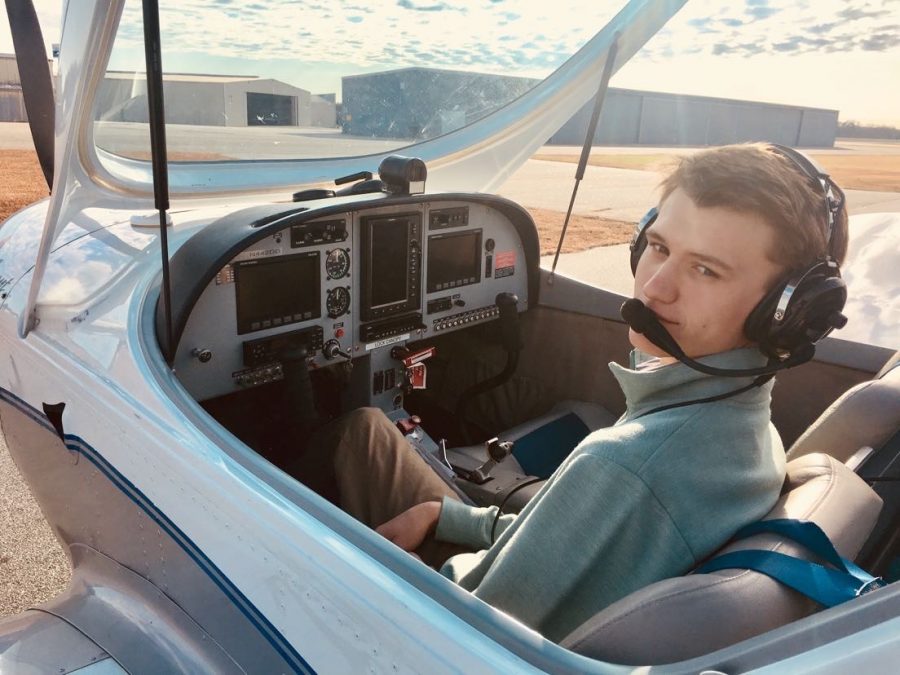 Preparing for takeoff, Hammett Anderson sits in the cockpit before taking to the skies.

Spartanburg High School's Own Takes to the Skies

As most high schoolers take to the roads after their fifteenth birthday, Hammett Anderson (12) decided to go somewhere else – the sky. For most of his childhood, Anderson has dreamed of becoming a pilot. This dream started when he was little, after one of his first ever flights.

“I’ve always been interested in being a pilot ever since I took a flight in a small plane when I was a kid,” Anderson said.

This reality, though, has not been easy to achieve. Anderson has had to put in countless hours in the classroom as well as in the sky with an instructor and now by himself.  Anderson finds the time aspect of flying to be the hardest thing about it, as he tries to balance friends, family, school and hockey with flying.

“Honestly, the hardest part in the lead up to this point has been trying to find the time to fly,” Anderson said. “It takes a lot of time and effort to fly so it is hard to balance it with my already crowded schedule.”

He sees this hard work pay off when he hits the skies. There, Anderson experiences the views that got him into aviation in the first place. These views make him feel a sense of freedom that he doesn’t feel when he is on the ground.

“My favorite part about flying is the freedom that it gives me,” Anderson said. “It also gives me an opportunity to do so many more things that I wouldn’t be able to do if I wasn’t a pilot.”

His hobby has been well received by his friends. They find it to be something different that separates Hammett from the rest of the people they know. Hammett’s life mentor Asa Kinnunen finds Hammett’s hobby one of the coolest things he’s seen in his lifetime.

“I think that it is cool how he has done something so spectacular at such a young age,” Kinnunen said. “And for him to be one of my good friends makes it even crazier.”