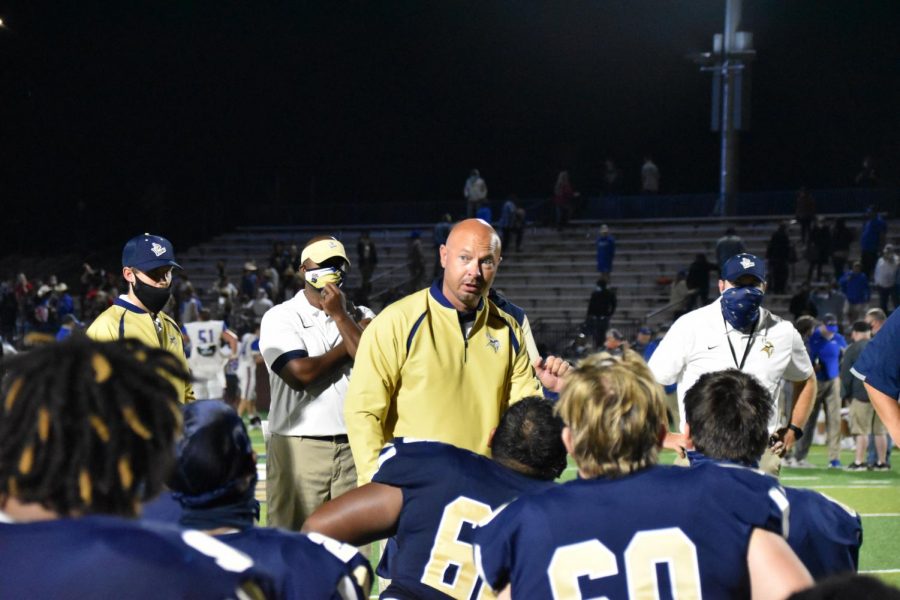 Coaching in his first ever game for the Vikings, Coach Mark Hodge attempts to lead his team to victory.

Coach Mark Hodge takes over the reins of Viking football, hoping to make an impact on and off the field

With the much-anticipated arrival of Friday Night Lights, the Vikings are looking toward a new leader to take them to the top.

Mark Hodge has taken on the role of leading the Vikings in their upcoming football season. This will be Hodge’s 23rd year coaching football. Originally, Hodge had plans to become a chemical engineer in college but decided to instead listen to the calling to become a football coach. His coaching career started at Broome in 1998.  He then became an assistant coach at Spartanburg. Hodge later had coaching stints at Carolina High and Chapman before finally settling back in with the Vikings as head coach earlier this year.

“I feel like this is where I am supposed to be,” Hodge said.

Hodge has several plans for the Vikings, beginning with a character development concept called “REFINED.” This program helps players become better people both off and on the field. Hodge also plans to change players academic performance for the better.  Part of the process includes players becoming leaders in the classroom by sitting up front and dressing for success on specific days throughout the week.

Kanye Richards (11) thinks Hodge has already made an impact with his academic policy and feels his attention to detail will get a lot of attention this year.

“To him, [Coach Hodge] it’s grades first,” Richards said.  “He is passionate about his kids, and he is a great influence on all of us in our personal lives.

Tiyon Watson-Staggs (11) wishes he was a freshman so he could stay longer and learn from him.

“Coach Hodge is supportive, helpful and he celebrates our achievements in the classroom and on the field.  My favorite part of the football program under Coach Hodge is that he lets us have a voice and listens to us,” Watson-Staggs said.

The changes implemented by Hodge are in the hope of making these student athletes better people on and the off the field, and this goal has already taken root in the hearts of the players under his leadership.

“My favorite part of the football program this year is Coach Hodge’s idea of ‘brotherhood.’  Everyone is involved.  There is no “I” in “team” – we have to operate as a whole and in that, we will find success,” Richards said.